According to the guys over at Slash Gear the Asus Eee Pad Transformer Prime is the first Android device on Earth to pack a quad core processor and delivers double to power of the original Transformer.

So here’s what the Transformer Prime offers, a 10.1-inch Super IPS+ touch screen with Corning Gorilla glass, an 8 megapixel rear camera, 1.2 megapixel front camera, 1080p video, LED flash, SonicMaster audio enhancement, that Tegra 3 quad core processor that runs at 1.3GHz when all cores are active and 1.4GHz when only a single core is used.

The Asus Eee Pad Transformer Prime comes in both 32GB and 64GB versions with both packing microSD expansion to ad another 32GB, HDMI port and 3.5mm jack, and also has a keyboard dock just like the original so you can get your transforming action on and also has extra micorSD expansion and a full USB port.

The Android slate is 8.3mm thick and weighs in at 586 grams, with swirl design aluminium back and comes in the choice of two colours, Champagne Gold and Amethyst Grey.

As for pricing, the 32GB Transformer Prime will hit your wallet for $499 whilst the 64GB model will cost $599, and that keyboard dock comes at an extra $149.

Funnily enough, there’s no mention of the operating system, but as recent rumour has it the Transformer Prime is being delayed release due to Google working with Asus, we can expect the device to arrive with Android Ice Cream Sandwich aboard. 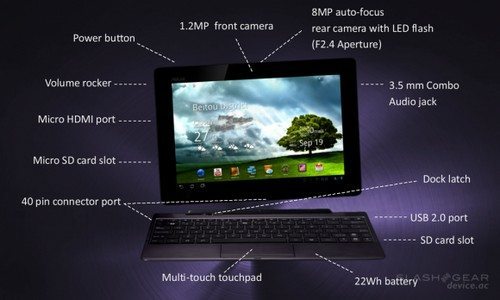