Galaxy Nexus up for pre-order with 3 UK

Everyone knows that the biggest new smartphone to hit the mobile space is due out in the United Kingdom in a couple of days time, of course that smartphones is the much talked about Samsung Galaxy Nexus and we recently reported that Samsung has now confirmed there will be no delay in the handset release as previously thought.

We already knew that O2 UK would offer the Android Ice Cream Sandwich smartphone, and now we hear by way of the guys over at Phandroid that 3UK will also be offering the Galaxy Nexus and has now put the device up for pre-order.

Word is 3 UK will delivery your Galaxy Nexus as of the 18th of the month, and if you really don’t wish to be tied down to a contract 3 UK will also sell you the Android smartphone on a pay as you go basis, although taking that route you’ll be required to hand over $499 up front.

So which carrier will you decide to opt for to get the Samsung Galaxy Nexus, will you be going the contract route or purchasing the handset on PAYG, or perhaps as an unlocked device? 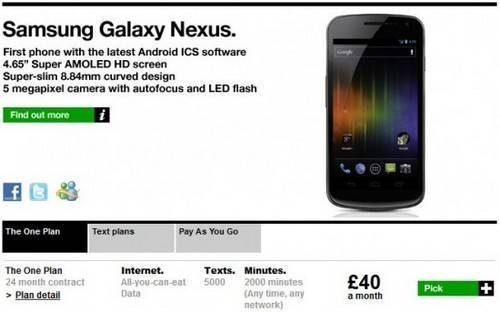