Unlike over here in the UK, over in the States the Samsung Galaxy Nexus still hasn’t surfaced for the public, and no one is quite sure just when the Big Red will release their version of the first Android Ice Cream Sandwich smartphone. However a potential release date for the LTE Galaxy Nexus may have just surfaced.

According to an article over on Ubergizmo the guys over at Droid-life have come across a Verizon internal document, which shows that the Verizon version of the Samsung Galaxy Nexus is scheduled for release as of the 8th of December.

Thus if the internal documents turn out to be spot on potential owners should be able to get their hands on the US Galaxy Nexus in time for Christmas. But wait, there’s more…

Originally it was listed that the Verizon LTE CDMA version of the Android 4.0 smartphone would become available in two capacities, 16GB and 32GB; however according to the guys over at Phandroid, it appears that the 32GB model is no longer listed for some reason.

According to the Galaxy Nexus tech specs page(image below), the 32GB model has now vanished and only has the 16GB version remaining, so does this mean that over in the US Verizon will only offer a 16GB Galaxy Nexus rather than both 16GB and 32GB models?

I guess we’ll know for sure whether this all turns out to be true come the 8th of December, but we’d love to know, if you are hoping to pick up the Samsung Galaxy Nexus from the Big Red will you be disappointed if the device only comes with 16GB of storage? 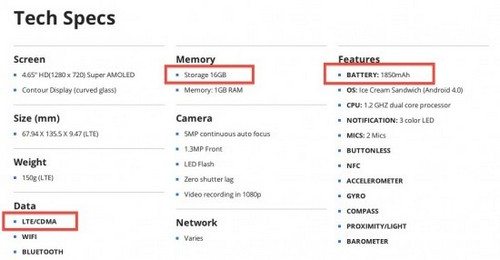 12 thoughts on “Galaxy Nexus Verizon release date but 16GB only?”