Since way back in 2006 a list of the top online retailers in the United Kingdom has been produced and ever since then Amazon UK and Argos have vied for the poll position, however this time round Argos has been force into 3rd place by Apple who has for the first time snatched second position behind Amazon.

According to an article over on The Next Web, the list of top online UK retailers has been published by intelligence service Experian Hitwise UK in conjunction with IMRG shows that Apple has managed to leap over rivals to go from eighth position to number two.

Amazon UK still holds onto that coveted first place whilst the like of Tesco, Next and Play.com continue to fight it out for thirst position. Back in August Apple held that eighth place and it is speculated that the iPhone 4S probably drove traffic during the period to enable Apple to snatch that 2ns place.

The graph, which can be viewed below backs up the presumption that the iPhone 4S release caused traffic to rise during the October period with the Apple website responsible for one in every two hundred and fifty UK internet visits during October.

However with Amazon UK and Argos expecting the Christmas period to be their busiest, come the next quarter Apple could well lose that second place position and will once again fall behind the top five no doubt.

Of the top fifty ASDA was the biggest mover, jumping twenty-three place from forty-six up to twenty-three whilst TicketMaster rose some sixteen places to the twentieth spot. 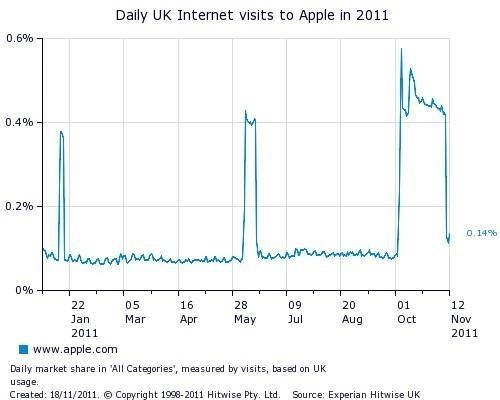