Although RIM is seeing a decline in BlackBerry smartphone sales, not everywhere in the world has moved onto purchasing such devices as the iPhone 4S and high-end Android smartphones, and in Indonesia the BlackBerry is still a big deal, and when the BlackBerry Bold 9790 was launched at an event in Jakarta many turned up to get the handset.

According to the guys over at Phone Arena by way of The Jakarta Globe, at the launch event for the RIM smartphone the first 1000 people that purchased the BlackBerry Bold 9790 would get an 50 percent discount as an incentive.

As a BlackBerry device is much sought after in the country the lines for snapping up the BlackBerry Bold 9790 started growing the day previous with over 1000 waiting to pick up the handset when the event was due to begin and those that had arrived early enough were given a red wristband.

However, apparently a rumour circulated that the Blackberry Bold 9790 was already out of stock leading to many of those waiting to charge the barriers in an attempt to get the smartphone, this led to chaos resulting in dozens of people being injured and some losing consciousness at the event.

Roughly 200 cops along with ambulanced were sent to the scene and order was eventually restored although the event was forced to close.

Seems somewhat strange top me that people would go so crazy over a BlackBerry handset, if fact any smartphone isn’t worth getting injured for no matter the maker, still I guess the BlackBerry is really that big in Indonesia. 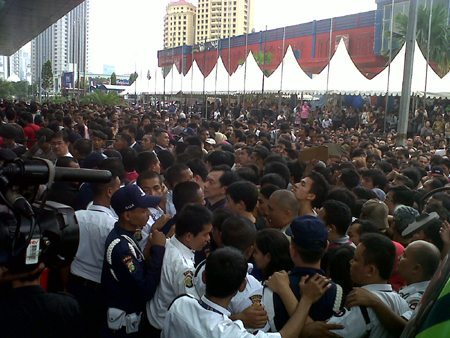