No doubt the biggest and best Android smartphone currently in the mobile space is the Android Ice Cream Sandwich packing Samsung Galaxy Nexus and although the Galaxy Nexus is available here in the United Kingdom elsewhere still waits for release of the handset such as Verizon over in the United States, but we learn today just when Japan will see the Galaxy Nexus release on NTT DoCoMo.

According to the guys over on Unwired View, NTT DoCoMo users in Japan will get the opportunity to get their mitts of the GSM version of the Android 4.0 smartphone in a couple days time, namely on the 2nd of December.

Although NTT DoCoMo has listed the release date for the Samsung Galaxy Nexus in Japan, when it comes to just what the Android smartphone will hit your pocket for the carrier hasn’t been so forthcoming, and thus the price remains a mystery for now.

Still I am sure the Samsung Galaxy Nexus will be received with just as much enthusiasm in Japan as it has elsewhere and will undoubtedly be a success there as well. 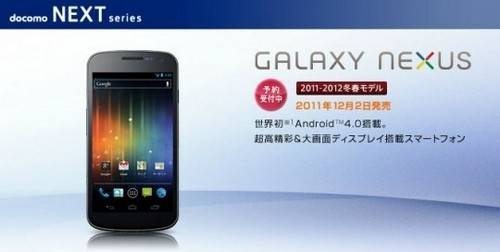