For all those here in the United Kingdom that might have been holding off picking up the first Windows Phone handset from Nokia due to waiting for the Nokia Lumia 800 to arrive in cyan on Vodafone, you just might like to know that your wait is now over and the cyan Nokia Lumia 800 is now available top purchase from Vodafone.

Thus if you wish to snap up the cyan Nokia Lumia 800 here’s what it will hit your pocket for, the cyan version is offered as a free smartphone on Vodafone on a tariff of Â£36 per month over the usual two-year contract for which you’ll get 900 minute, unlimited texts, 750MB mobile date, and 2GB BT Openzone WiFi access.

Both new and upgrading customers will also benefit from Vodafone Data Test Drive that enables the user to eat as much data as they wish for a period of three months and can also gain up to Â£270 for their old handset via Vodafone Buyback.

If you wish to pay less per month you can get the cyan Nokia Lumia 800 for Â£31 per month on a two-year term for which you’ll get 600 minutes, 500MB mobile data, and 2GB BT Openzone WiFi access, although the device will cost Â£49 up front.

So there you have the pricing for the Nokia Lumia 800 in cyan on Vodafone, will you be picking up the cyan version as a free smartphone? 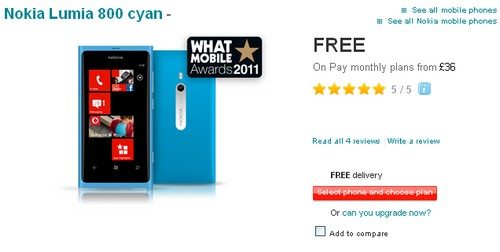 One thought on “Nokia Lumia 800 Cyan from Vodafone UK, prices”