The Amazon Kindle Fire Android tablet is quite a reasonable priced slate as tablets go but the Kindle Fire doesn’t run the latest operating system from the Google guys, but now apparently there is a new tablet available that does come sporting Android Ice Cream Sandwich and has a very attractive price tag.

According to the guys over at Cnet, China based Ingenic Semiconductor and US based MIPS Technologies have announced the world’s first Android 4.0 tablet the NOVO7 with a worldwide availability.

The NOVO7 Android 4.0 tablet is currently available in China and will become available in the US and other markets in the coming several months under company brands and leading international and OME Electronics.

Price wise the NOVO7 commands a very attractive price tag of just $99, and is available via Ainovo, so there you go the world’s first Ice Cream Sandwich tablet for under 100 bucks, will you be looking out for the NOVO7? 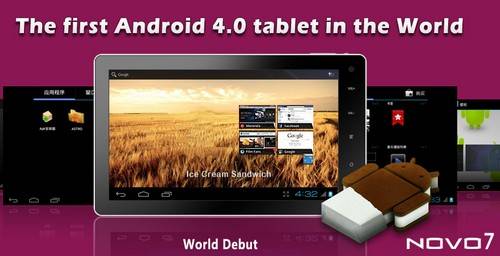