Now we know that gaming on your iPhone can sometimes be a bit addictive but there are times when you should set aside your iPhone and stop gaming, such as when an aircraft is about to take off. However, it appears that movie and TV star Alec Baldwin was so engrossed in playing Words with Friends he decided he wasn’t going to stop.

Thus according to an article over on Phone Arena, Alec Baldwin took to his Twitter account to let the world know he was kicked off the American Airlines flight for refusing to turn off his iOS smartphone before take off.

Baldwin was playing the game whiles waiting for the American Airlines flight to depart and despite the usual warnings to turn off all cell phones and electronic equipment before take off Baldwin continued to play the game.

Apparently after a short “heated argument” with the flight attendant the celebrity was asked to depart the plane and he had to take a later flight, presumable after he had finished playing with his iPhone.

Baldwin’s tweet of the incident was met with sympathy from his followers an even Zinga the makers of the game that got Ale booted off the flight tweeted that A.B.S.U.R.D is worth a minimum of 11-points in Words with Friends.

Just goes to show though even if you are a celebrity, rules are rules when it comes to flying and applies even to the iPhone. 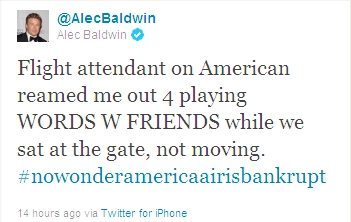