Yes folks another step into the design world of the concept phone, but not just any old smartphone concept this time around, but rather a concept for the hugely popular iPhone and in remembrance of the late Steve Jobs, with the iPhone SJ, something no doubt many of the iOS faithful feel it is about time Apple delivered.

Naturally this is a concept phone so don’t expect to see it surface anything in the future, but the concept is brought to our attention by the guys over at iDownload Blog.

The iPhone SJ concept has been designed by Antonio De Rosa who has a few of images posted to his ADR Studio website, and this concept sports a edge-to-edge display, something that it has been previously rumoured Apple is looking into for the iPhone 5.

The iPhone SJ or iPhone Steve Jobs if you prefer, has a polycarbonate lightweight body, sports a 10 megapixel camera and is powered by a dual core A6 processor, so not beyond the realms of reality.

Have to say thought this iPhone SJ concept does look like a very nice design, perhaps Apple should think about employing people like De Rosa especially after the design letdown with the current iPhone 4S.

Do you feel that Apple should honour the memory of their main man by delivering an iPhone bearing the Steve Jobs name?

If you were given the choice to name the next iPhone release, what would you call it? We have a few names such as iPhone 4SJ, everyone thinks it might be called the iPhone, what about the iPhone Edge seeing as it might feature an edge-to-edge display. 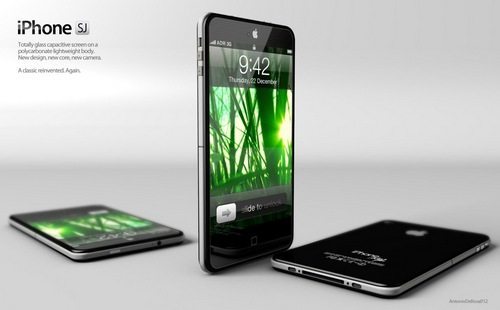