NFC comes to iPhone via microSD

As you are no doubt aware Apple is somewhat lacking behind most when if comes to Near Field Communication (NFC) as thus far they have not seen fit to include NFC functionality on any of their iPhone handsets, although there are a few workarounds like an NFC enabled SIM card, and now another option for gaining NFC on the iPhone has surfaced.

According to the guys over at Ubergizmo by way of Techon.nikkiep, DeviceFidelity along with Spring Card Systems have come up with a microSD card that sports NFC functionality and which is places into an iPhone case and thus delivering NFC to the iOS smartphone.

The joint venture between the two companies have also launched their very own mobile payment service called “moneto” that along with the NFC enabled microSD is used via an application which is downloaded to the iPhone and also features a function showing nearby shops that use mobile payment service.

Apparently the NFC microSD along with the iPhone case and a prepaid card with $10 credit from the University National Bank will be sold at a price tag of $80 although they don’t say when the case and microSD will be available to the iOS public.

If however you are using the Android platform and feeling a little left out, fear not because apparently the “moneto” payment service will be coming to Android devices at some pointing Q2 of the year.

So with this in mind will you be getting your iOS NFC fix via this new case and microSD and checking out the new “moneto” service when it is available? 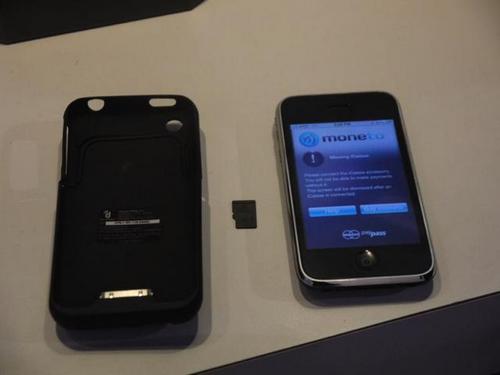