According to an article over on The Next Web by way of MoDaCo, online retailer MobiCity has posted an advert for the HD version of the populate Android 2.3 Gingerbread smartphone.

Other specs seem to be NFC, WiFi a/b/g/n, Bluetooth 3.0+HS, an 1850mAh battery and LTE connectivity; however apparently MobiCity’s Australian site has all the Samsung Galaxy S2 HD specs available.

Now hard and fast date as to when the Samsung Galaxy S2 HD will become available in the United Kingdom or what price it will command but according to the Australia site the Galaxy S HD is up for pre-order unlocked and commands a price tag of $749 from MobiCity Australia. 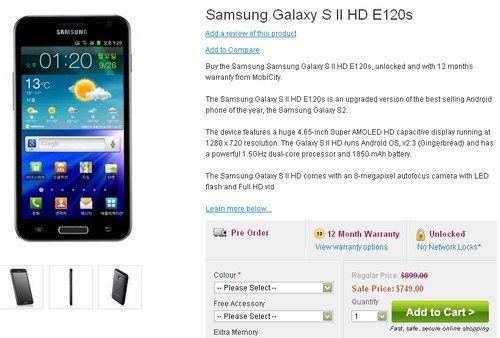