If you are a fan of Sony Ericsson devices you just might like to know what the company has in store for you this year in the way of upcoming and as yet unannounced smartphones, their supposed launch dates and what the handsets are expected to cost, so we have that information for your consideration below.

According to the guys over at GSMArena, this info was originally leaked via Sony’s sales report in India, and thus is for the Indian market but should also apply to both Asia and Europe and as such the guys have converted the currency into Euros.

First off the Sony Xperia S also known as the Nozomi isn’t included in the list, as we already know the Android 3.2 Gingerbread smartphone will see release in March.

Of course the monikers in the upcoming Sony Ericsson phones list are all codenames and thus will probably have a different name once they surface, and apparently all devices on this list will run the Android operating system.

So it would appear that Sony Ericsson will be fairly busy in 2012, although whether any of these devices will come out under just the Sony brand remains to be seen, but hopefully we’ll find out more at MWC 2012 next month…full phone list below. 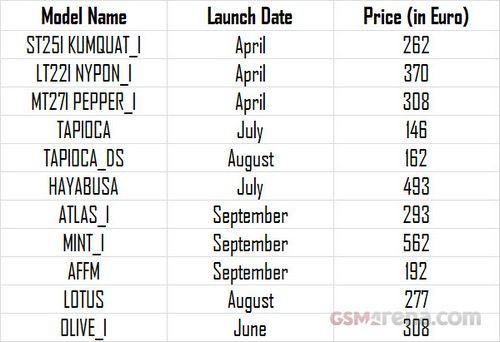