For quite a while now there has been an app available for iOS devices called Skin Scan, and is touted as the most accurate skin cancer detector on the iPhone, and this application can apparently reduce the cases where people reach a medic when it is too late by delivering a revolutionary screening method.

The Skin Scan iOS app features automated risk assessment for m**es a fragmental map for m**es/ surrounding skin, and archiving of each analysed case. Apparently the app works by holding the app 6 to 7-inches from the skin and focus on the m**es properly and capture a picture with the camera.

Once said picture is taken, using 2 fingers you move and scale to fit as much of the m**es inside a red control square and then press the “Use” button and wait a few seconds to get the result.

However, does the Skln Scan app for iOS devices actually work as it says it does? Well it appears that there is some negativity from users over this application with customer comments basically saying the Skin Scan app doesn’t work.

One customer says outright that the app fails to work properly, whilst another says the app is a lie and a disgrace and not to purchase if because it doesn’t work. Another customer says that a $5.49 price on iTunes for an app that doesn’t work is a joke and wonders if Apple tests these apps before offering them for sale.

Thus is would appear that this particular cancer detector app isn’t worth the money and fails to do what it claims to do, so we’d like to hear from any of our iOS readers out there who have downloaded the Skin Scan app to hear what they have to say, so feel free to voice your opinions of the Skin Scan iOS app to our comments area below. 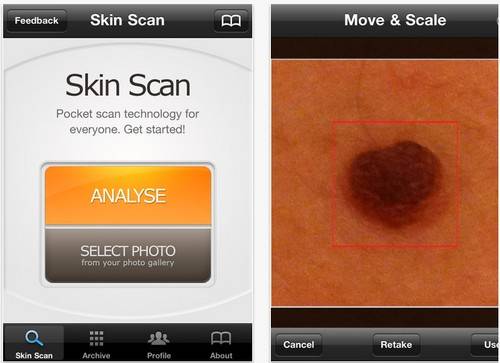