We enter the world of the concept phone once again today to bring you a new concept Nokia smartphone with a rather angular design in the form of the Nokia Diamond concept phone that has been created by designer Richard Malachowski from China that brings sharp edges and corners to the mobile phone.

According to the guys over at Concept phones, by way of Coroflot, the unusual Nokia Diamond even features a triangle shaped camera sensor along with what appears to be a wood or wood effect backing and although features a resemblance to diamond corners can still sit on a flat surface.

So what specs does the Nokia Diamond offer? Well apparently the concept smartphone has a 4-inch Clear Black AMOLED touch screen, a 1GHz processor of some description, either an 8 megapixel camera or a 5 megapixel camera and 1GB RAM.

Furthermore apparently the Nokia Diamond concept gives you the choice of operating system between Meego and Symbian Belle, but strangely enough not Windows Phone.

Whilst that Nokia Diamond backing looks to be wood along with the volume buttons, the guys suggest that the rest of the device could possibly be polycarbonate but considering the form factor, shape and materials they would consider the Nokia Diamond to be a fashion phone.

Obviously as the Nokia Diamond is a concept phone the chances of the device ever becoming a reality are somewhat slim, but what do our readers think of the Nokia Diamond, would you like to see this angular design smartphone see release? 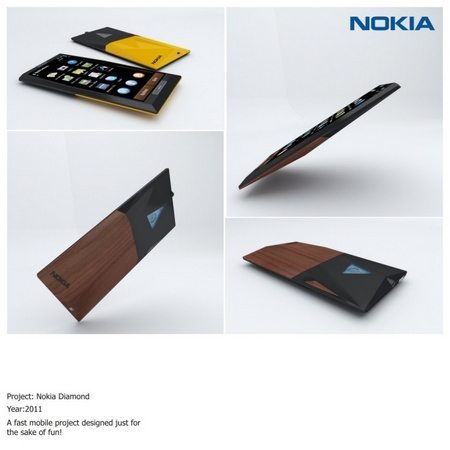 One thought on “Nokia Diamond release should happen”