So we have the very successful Asus Eee Pad Transformer, and then the popular Asus Transformer Prime, but what about the next generation Transformer slate from Asus? Well apparently a new Android tablet has surfaced that could possible be the next Transformer tablet to come out to play and that device is rumoured to be the Asus TF300T tablet.

According to the guys over at Engadget, French site Nccc.cool3c has come up with several pictures the Asus TF300T tablet that they claim could be the successor to the Asus Transformer Prime.

Apparently a QuieTek certification doc showed the TF300T codename that is apparently numerically higher then its Transformer sibling with the original Transformer having the codename “TF101” whilst the Asus Transformer Prime codename was “TF201.”

Apparently the images of the Asus TF300T tablet do not deliver any other details on the new slate other than the device is a 10.1-inch tablet with a blood red type backing and what appears to be a 3.5mm jack, and obviously it will be an Android tablet and at a guess probably Android Ice Cream Sandwich.

So for now that’s all we know on the Asus TF300T a possible next Transformer tablet from Asus but as Mobile World Congress 2012 kick off later this month perhaps we’ll find out more about the TF300T then. 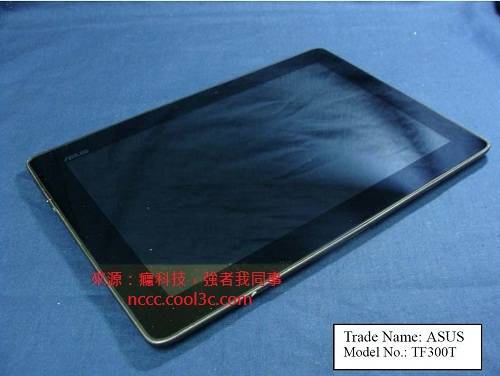