When logging on today and hitting up the Google page one can’t miss the new Google Doodle in celebration of one of the United Kingdom’s greatest novelists, Charles Dickens. The Google doodle celebrates the 200th birthday of the author in a way we have all come to expect from the Google guys.

However it’s not just Google that celebrates the bicentenary of Charles Dickens birth, as according to an article over on the BBC, the University of Warwick is launched a new mobile app on both Android and iOS platforms called Celebrating Dickens.

Apparently the Celebrating Dickens mobile app will include podcasts, videos on Victorian Britain, articles, Dickens novels and adaptations on the author’s works, and on the 10th of Feb the University will release a feature length documentary that includes an interview with Charles Dickens’ great-great-great granddaughter Lucinda Hawksley.

Andrew Davis, award-winning screenplay writer that adapted Little Dorrit and Bleak House for the BBC has also contributed to the project. 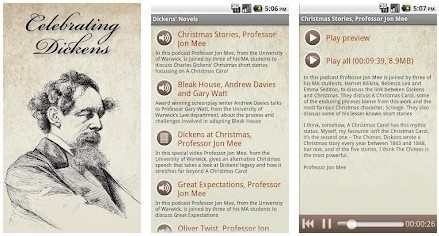