For those that use the Android Google Voice app the application has now received an update that delivers a nice Android Ice Cream Sandwich style user interface along with an icon and a couple of other changes in the updated app, one of which is asynchronous SMS sending (offline queuing), although it still works synchronously for multiple recipients.

For those that aren’t sure what the Google Voice app does on Android the app allows you to make cheap calls with your Google number, along with sending free text messages, listen to voice messages and read transcripts.

However one should be aware that the Google Voice app for Android is currently only available in the United States,so no good for international users.

According to the many reviews on the application most are happy with the updated app with one saying adding asynchronous fixes all my problems with 4G on their Droid Bionic, another user with the Motorola Droid X says they love the new icon but looks somewhat blurry in certain sizes.

Although there are some negatives such as a Samsung Galaxy S user saying all their messages are now stuck in a queue, whilst one disappointed users says that Google seems to have taken a leaf out of the Microsoft book and added “lipstick to a pig.”

Anyway for those that haven’t yet grabbed the updated Google Voice app you can do so by hitting up the Android Market where it can be downloaded for free of course, and please feel free to voice your opinions on the updated version to our comments area below. 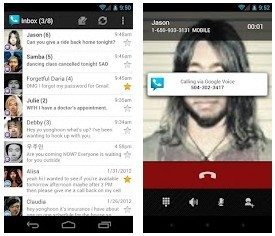