It would appear that Nokia has a new smartphone up their mobile sleeve albeit being a Symbian OS handset; I thought Nokia was dumping Symbian but there you go apparently not jet yet. Anyway the new smartphone is a Nokia Belle device called the Nokia 801, and an image of the device has been leaked to the net waves.

According to the guys over at Smartphone Geeks, their source (unnamed of course) says that the Nokia 801 handset will sport a 4-inch ClearBlack AMOLED touch screen along with a 12 megapixel auto-focus camera and dual LED flash, 1080p video, 1.4GHz processor, and 512MB RAM, and it is expected that the display resolution will be 640 x 360 like other Symbian devices although they aren’t too sure on that, but apparently it has been confirmed the Nokia 801 will surface with NFC aboard.

Word is the Nokia 801 will come out to play running Nokia Belle and not have any physical buttons on its front and resemble the Nokia N9 and Nokia Lumia Windows Phone devices. The guys also say they have no idea whether the Nokia 801 is the successor to the Nokia N8, a handset that was supposedly the last Symbian handset.

Furthermore, the man frequently in the know about Nokia smartphones albeit on occasion being wrong, Eldar Murtazin has let it be known via his Twitter account that the Nokia 801 leak is in fact real.

So perhaps the Nokia 801 will be one device that we will find out all about during Mobile World Congress 2012 in a couple of weeks time. 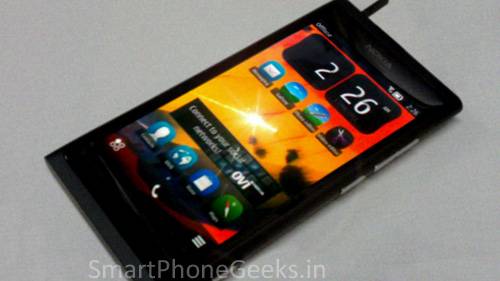