If you own a tablet and use it quite often and simply can’t stand to be without your slate there’s a new tablet accessory that allows the user to wear their tablet whenever and wherever they wish, and the accessory is called the GoPad, which is currently available for pre-order for the iOS faithful that own an Apple iPad 2.

According to the guys over at Gizmag, the GoPad is a deluxe stand for the Apple iPad that can be transformed to a variety of useful positions along with being worn by using the GoStrap shoulder harness.

Apparently the maker suggest the GoPad is good such thing as playing games on the iPad whilst on the move, taking orders at a restaurant, using as an animated name tag during a social setting, reclined computing when flying, and even as a cocktail drink holder when at parties.

The GoPad isn’t just for the Apple iPad 2 though as apparently the company also has a GoPad coming soon for the Samsung Galaxy Tab, the Motorola Xoom and Research In Motion’s BlackBerry PlayBook, so all tablet users can fulfil their geeky side.

Price wise the GoPad for iPad can be reserved for delivery in March when dropping a deposit of $15, with the whole shebang including GoPad, GoStrap shoulder harness and GoBag will set you back $89.00 from GoPad.

So will any of our Apple iPad 2 toting readers by rushing to reserve the GoPad bundle so they can hold their iOS slate close to their chest? 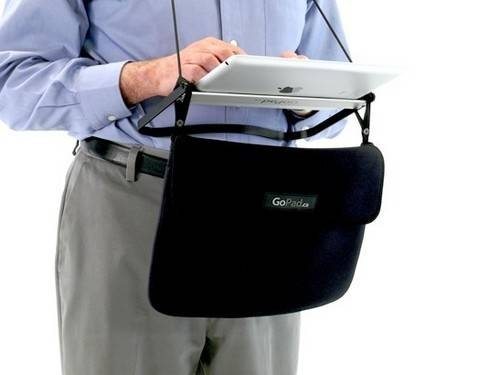