Samsung Galaxy S3 realistic specs but not believable yet

Apparently old Samsung has posted an USProf (user agent profile) which word has it leaks the screen resolution for the upcoming Samsung Galaxy S3 smartphone. Previous USProf leaks have divulged that the Samsung Galaxy Nexus sported a WVGA screen, but was obviously untrue; however this latest USProf leak for the Galaxy S3 seems somewhat more realistic.

According to the guys over at Phone Arena by way of Pocket Now, this leaked USProf show the Samsung Galaxy S3 screen resolution to be 1024 x 600 an almost 16:9 aspect ratio, and the guy’s say whilst it appears real enough a true 16:9 ratio would more than likely make for a more elongated form factor than normally seen on smartphones and that the problem they have is the resolution does not fit HD capacity.

The guys do say though that it is quite possible old Sammy might forgo HD on the Samsung Galaxy S3, but one would have though Samsung would like to push HD in their marketing of the Galaxy S3 and thus it is difficult to believe it isn’t an HD screen.

Therefore the guys conclude that although the Samsung Galaxy S3 screen may well sport a 16:9 aspect ratio they are fairly sure the device will sport a 720p display.

Rumoured specs for the Samsung Galaxy S3 include a quad core Exynos processor, 8 megapixel rear facing camera, 2GB RAM, 4G LTE capability, and now a 1024 x 600 screen, probably a Super AMOLED Plus screen, and all wrapped up in a 7mm thick housing, although of course none of these have been confirmed so aren’t quite believable just yet.

We do know though that Sammy will not be unveiling the Samsung Galaxy S3 during Mobile World Congress 2012 but rather opting for an unveiling sometime in spring. 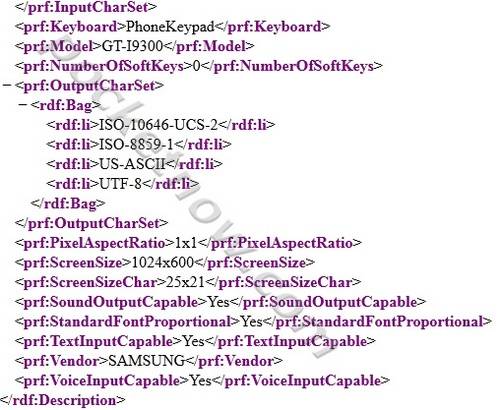