If you are an Android user who stores music on the cloud with Google Music there is now an app available for Android called Cloud Music Sniper, an app with no Google restrictions as you music is no longer limited to your data connection and being played in one app as the Cloud Music Sniper app for Android enables the user to take offline music and play it in any player with all its id3 information intact.

Apparently the Cloud Music Sniper app for Android is so powerful the user can take their music off their handset once it has been sniped and then play that music on any desktop music program without any problems.

To make your music available offline apparently all you need to do is fire up the Cloud Music Sniper application and follow the directions, and the music will then be stored on an SD card at /sdcard/t3hh4xx0r/gMusicSniper/ along with album, track name, artist, and with the album artwork embedded in the mp3.

Apparently Cloud Music Sniper was previously known as Google Music Sniper but was suspended because of the name but now if you wish to make use of what the Cloud Music Sniper app for Android has to offer you can download the app to your chosen device running Android 2.1 or above at a cost of Â£1.26, roughly $1.99 from the Android Market. 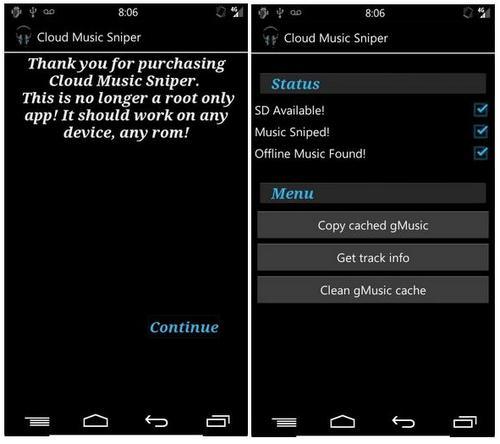