If you’re a keen photographer using Apple iOS devices then we have news for you of a new app that could be right up your street. Power Tumblr from adaptIO LLC is an HD photo app for iOS devices and is available now. Read on to find out much more.

The app has been designed to make browsing Tumblr Dashboard high-definition images easy as well as sharing them with Facebook, Twitter and other social networking sites. Power Tumblr will also make it simple for users to save images to their iOS Photo Albums along with emailing photos to contacts and a real benefit of Power Tumblr is that when sharing or saving everything is done using original quality files. Those with iPads will particularly notice the quality of images rendered in original resolutions.

For the rest of February the Power Tumblr app is priced $1.99 and you can download it from iTunes here. This special price will allow people to try it out and find out for themselves how quickly scrolling through the dashboard can be. As Tumblr is a hugely popular social networking site we can see this app having an appeal to many iOS users. Power Tumblr is compatible with the iPhone 3GS, iPhone 4, iPhone 4S, third and fourth generation iPod touch and the iPad and requires iOS of 4.3 or later. The download size is 6.6MB.

When using Power Tumblr users can choose to show or hide the sharing menu and also pinch and zoom images to see them in all their glory. We’d really like to hear your thoughts on Power Tumblr and you can see a screenshot below this story. Are you already heading to iTunes to download this app? Maybe you already have done and can let us know what you think? 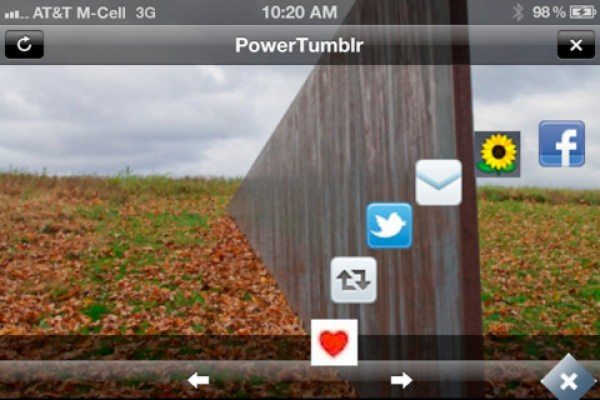