So we thought we’d pass along what the Droid-life guys reckon on the Motorola Droid Xyboard, there are a few good and bad things with the Android slate, so kicking off with the good points…first off the Xyboard is half the weight and almost half the thickness of the Motorola Xoom, and feels much more pleasing to hold.

Another advantage to the Motorola XyBoard is LTE and the Xyboard offers fast download speeds no matter where it was being used and was faster than if connected to WiFi. The Android slate packs a 1.2GHz dual core processor that flies through apps and home screens without lag, and is responsive and snappy.

The Xyboard screen is vibrant and bright whilst watching videos or Netflix is a joy, although there is still some ghosting when switching through big images across the screen, whilst the camera is fairly decent delivering decent colour.

Now the bad…the Xyboard runs Android 3.2 Honeycomb, which the guy’s say is buggy, laggy and a let down, and Motorola definitely needs to be updated to Android Ice Cream Sandwich. Another downer if the battery life, with a single day of heavy use and Netfilx over 4G drained the battery in almost 3.5-hours.

The Motorola Droid Xyboard also lacks a quad core processor as found in the Asus Transformer Prime and lastly come the price of the Android tablet at $429.99 for the smaller model on contract and $529.99 for the 10.1-inch slate. 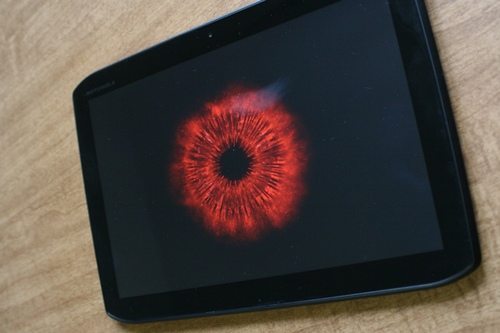 2 thoughts on “Review and feeling bad about Motorola DROID XYBOARD”