I’m pretty sure most of Apple’s loyal iOS base is eagerly awaiting the arrival of the third generation iOS slate, the Apple iPad 3 as it is being called, and no doubt most are wondering just when the iPad 3 will come out to play. Well apparently a secret Apple iPad 3 shipping manifest has now come to light shedding a little info on the matter.

Apparently the orders are under high security and are arriving from Chengdu in China and apparently an unnamed source at Foxconn’s Chengdu plant says that the shipment is for “Apple’s latest product,” and the manifesto is reportedly from major international cargo flights at Chengdu International Airport, which could mean that Apple is gearing up for a near immediate release of the iOS tablet.

In anticipation of the release of the Apple iPad 3, on Sunday retailer Best Buy cut the price on all their Apple iPad slates by a nice cool 50-bucks, which means you can now purchase the Apple iPad 2 16GB WiFi only model for $449.99 whilst a 64GB 3G iPad now costs $779.99.

Retailers are believed to be clearing out their inventory in anticipation of an Apple iPad 3 unveiling being just a week away.

SO there you have it, it looks like we could indeed see the Apple iPad 3 surface in the very not too distant future, so will you be standing in line to be one of the first to snap up the latest iOS slate from the Apple camp? 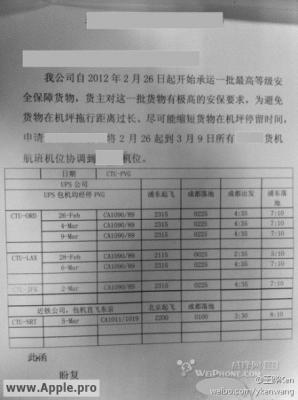