There have been rumours in the past that the Google guys will deliver a 7-inch Android tablet to the Android faithful at some point in the future, but up until now there was no inkling as to what that 7-inch tablet might be know as, however that now appears to have changed as a possible name for the device has surfaced.

According to the guys over at Ubergizmo, the guys at Fusible say Google has registered numerous domain names that are related to the name Google Play, which could be related to a Google gaming device perhaps; however Google has also registered the domain for googleplaydownloads.com, googleplayapps.com, and googleplaymagazines.com.

Which the guys say could well point to this Google Play device being something bigger than a gaming device, so perhaps a tablet PC of some description.

Of course the domain names might not mean anything as the Google guys could simply be registering them just in case they opt to use the moniker Google Play at some stage in the future so of course at this stage in the game it’s all speculation but who knows perhaps we will soon see a 7-inch Android slate sporting that Google Play handle.

Apparently Google registered a bundle of names via brand protection firm MarkMonitor on the 29th of February, so I guess it’s just a matter of a waiting game before we find out anything else, and of course if we do we will pass it along. 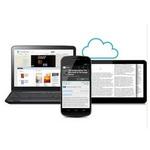