I am fairly sure that most of those that use the Internet by now have heard of Joseph Kony, who back in 1987 became leader of a rebel group and called it the Lord’s Resistance Army (LRA), and has earned the reputation of cruelty and brutality. Joseph Kony, when running out of fighters began abducting children to use as soldiers or even for wives of his officers.

Recently a video hit YouTube called KONY 2012 and is a film and campaign made by Invisible Children to raise awareness and gain support for the arrest of Kony and set a precedent for international justice, the video has currently received over 49 million hits, and we have embedded that video below.

If you are one of the Android faithful out there you can now download the Kony 2012 app for Android to your device with a goal of spreading the word about Joseph Kony across the globe in order to make Kony infamous.

The Android app has two purposes, firstly to let everyone know that Joseph Kony is known as the world’s worst war criminal, and secondly that US military advisors support the Ugandan Army until such times as Kony is captured and the LRA is completely disarmed.

The Joseph Kony 2012 Android app is available to download to your chosen Android device as a free app from Google Play so you can help spread the word, and you can also pledge your support by making a donation by hitting up (Here). 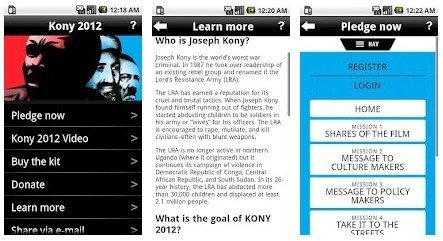