The latest instalment of the much loved Resident Evil franchise will be launching around the world this week, and to coincide with the games release an application has been launched for UK users called Zombie Hunt, which is a companion app for Resident Evil: Operation Raccoon City.

Capcom has announced the availability of the application that according to a report over at EuroGamer, allows users to shoot zombies via augmented reality tech, and is also available for owners of the iPhone 3GS or later, iPod Touch 3G or later, and iPad running iOS 4.0 or later. The application is also available to users of the Android platform and again is a free download.

Players have the chance of teaming up to kill virtual zombies via their smartphone or tablet when travelling to special locations in London, and you will also be able to link it to your Facebook account to let your friends know how well you are doing with your high scores.

The training mode also allows users to test their zombie killing skills from the comfort their own home, or even a workplace. Zombies will make your heart miss a beat as they emerge from your sofa, or you can have great delight watching a zombie creeping up behind an unsuspecting colleague.

Whoever manages to achieve the highest score in either mode after two weeks, will win themselves a free copy of Resident Evil: Raccoon City, which is set to launch this coming Friday. A statement from the applications developer Digicave stated that “the zombies are truly frightening” and they will be appearing all over the UK.

It went on to say “This is going to be something truly incredible”, and the app is the ideal way of bringing the horror of the game “onto the streets and into the lives of gamers”. Unfortunately the application is only available to UK users and can be found by searching the App Store or Google Play for Zombie Hunt.

Have you downloaded the application ahead of getting the game when it is released? 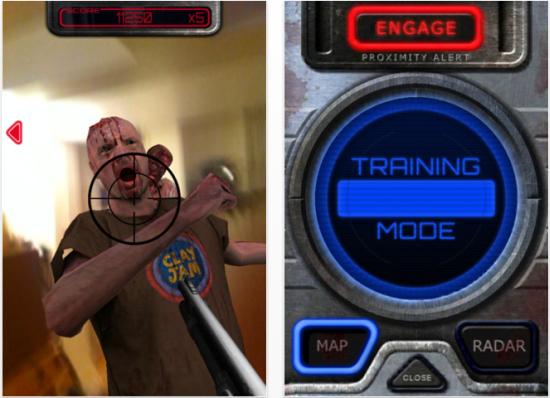