It appears there just isn’t any mobile platform loyalty when it comes to China, we know that the Chinese are famous for ripping off the iPhone and even Apple stores, but it appears Apple and their gear isn’t the only thing China likes ripping off, as the latest word is a rip-off Android store has now appeared in China, and to add insult to injury the fake Android store sporting the Android robot logo is even offering iPhone handsets.

According to the guys over at The Register, by way of Isidor Future Blog, the fake Android store has surfaced in Zuhai City in the same district where Apple is at loggerheads with Proview over ownership of the iPad trademark, the Guangdong province.

Apparently thought along with numerous Android based smartphones, this particular knock off Android store also sells the iPhone and Apple iPad along with Apple computers, and of course as Google doesn’t have any Android stores in China there is cause for legal action to be taken by both Google and Apple, so which one will be first?

There is of course at least one Android store in the world, and that is Androidland over in Australia, but of course that is only a concession inside a the Telstra flaship store in Melbourne. 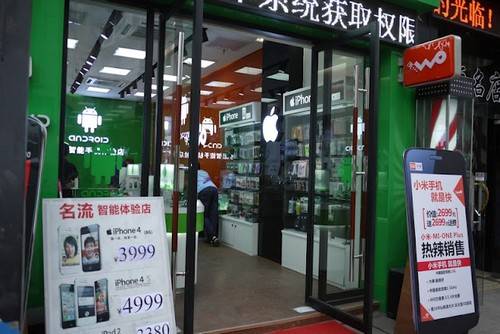