If you happen to be a bit of a photography buff with an iOS device you might like to know that Min-U-Guides have now updated their D3s DSLR iOS app, an application that plugs the user straight into the cameras menus and delivers almost 200 menu descriptions along with supporting graphics that depict options, menus, controls and buttons, and bring product documentation for your Nikon DSLR right to your iOS device.

With the D3s DSLR app for the iPhone, iPod Touch and Apple iPad, screens and menus look familiar due to them being similar to that of those used on the Nikon D3s and help the user learn about the cameras operation and features.

The D3s DSLR app also offers DSLR calculators enabling the user to know exactly how many images, either DX or FX format will fit on a CF memory card from a 4GB card up to a 128GB card along with delivering Depth of Field, Angular Field of View, and Dimensional Field of View by Focal Length calculators.

The D3s DSLR application has also recently been rebuilt for iOS 5.1, and now features iPad SplitView delivering enhanced navigation and a new icon, product review updated for the latest Nikons including the D4 and D800.

For those that wish to take advantage of what the D3s DSLR app offers, you can download the app to your chosen iOS device at a cost of $4.99 by hitting up iTunes. 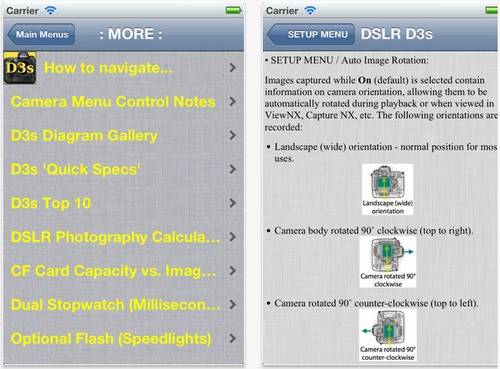