The other day we told you about the new BlueStacks app player that uses a new technology known as LayerCake and enables users to use Android applications on their Windows desktop PC, which can be downloaded from BlueStacks.com. Well now the BlueStacks Cloud Connect app has become available on Google Play.

The BlueStacks Cloud Connect app enables users to easily and remotely push apps from their Android phone to their computer and use them in windowed or full screen mode, and there are apparently far more apps that now work in BlueStacks than in the Alpha version.

With the BlueStacks Cloud Connect app for Android you can play hundreds of thousands of games on your Windows PC including Angry Birds, Words With Friends, Where’s My Water? and many more. You can massage your friends from your desktop with such messaging apps as WhatsApp, KakaoTalk and others.

You can also use social networking apps such as Facebook and Twitter, use media players such as WinAmp, edit photos and share with such apps like PicSay and Skitch, or let the kids have fun and learn with e-books like The Lorax and educational apps. 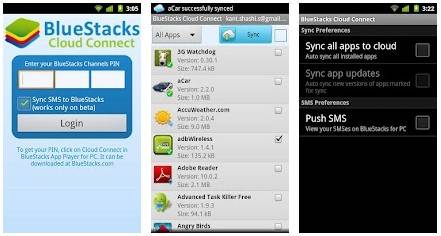