Most peoples lives these days are very busy, and sometimes busy people forget things, things that could be important such as birthdays or anniversaries and such, but what if you could write a text message in your spare time and then schedule that text message to send later when it needs to be send? Well if you are one of the iOS faithful there is an app for that.

The iOS app is called Future Text for the iPhone, iPod Touch and Apple iPad, and basically allows the user to type out a text message when they are not so busy, and then pre-program their iOS device to deliver that text message at a future date and time.

There are two versions available, the free version, Future Text Lite that enables the user to program a text to be delivered up to 30-days in advance, and available from iTunes.

The paid version, Future Text that enables the user to delay a pre-written text message for an indefinite time into the future, and also use a web based console to create and pre-program text messages and sync those messages automatically in real time.

For those that would like to take advantage of what the Future Text app for the iPhone, iPod Touch and Apple iPad has to offer, you can download the Future Text app from iTunes at a cost of just $1.99, and then you can rest assured that you will never be moaned at again for missing that birthday, anniversary or other important occasion. 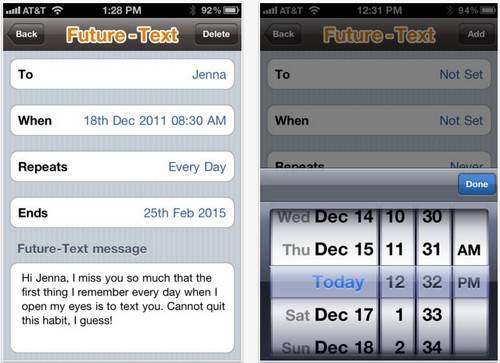