Way back at CES it came to light that Toshiba would be releasing an Android tablet sometime this year, and up until now it wasn’t known just when Toshiba would deliver the Android slate to the mobile space and there wasn’t much detail available on the tablet, which apparently isn’t just one Android tablet but three.

According to the guys over at Droid Life, Toshiba has now officially announced the Toshiba Excite line of Android tablets, along with some details on what these new slates offer to woo potential customers, along with exact release dates for the good old US of A and includes prices.

Apparently the 10-inch Toshiba Excite tablet will be released in the US on the 6th of May and command a price tag starting at $450, and this will be followed by a 7.7-inch 32GB slate costing 500-bucks and a 13-inch 32GB version costing 650-bucks that will see release on the 10th of June.

So that’s 10, 7.7, and 13.3 inch tablets all supporting an NVIDIA Tegra 3 quad core processor along with thin and light designs in aluminum shells and Gorilla Glass displays and all will run the Android Ice Cream Sandwich operating system.

The 7.7-inch Android tablet sports an AMOLED display, and is 0.3-inches thin and weighs 13.4 ounces.

So there you have it, if you are looking to pick up an ICS Tegra 3 tablet perhaps the new Toshiba Excite range might suit your needs, do any of these new slates capture your interest? 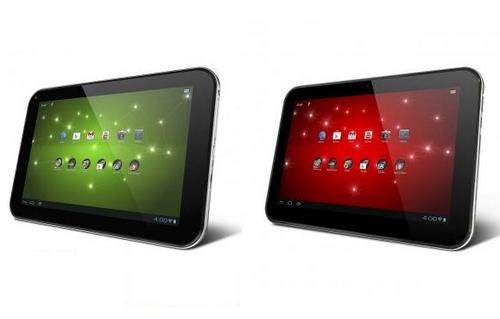 One thought on “New Toshiba Excite tablets releasing to woo”