When it comes to smartphones there is always quite a comparison when it comes to what camera a device sports and whether one camera is better than another, and let’s face it the biggest camera offering in the mobile space to date, although not yet available is the massive 41 megapixel shooter on the Nokia 808 PureView smartphone.

I’m sure you know that with virtually any new smartphone sooner or later it gets compared to the daddy of handset, the iPhone, so we thought we’d take a look at how the Nokia 808 PureView stands up against the might of the iPhone 4S, spec and photography wise that is.

Well obviously when it comes to the megapixel stakes, the Nokia 808 PureView slaps the iPhone 4S right in the kisser as the iPhone 4S only offers an 8 megapixel snapper as opposed to the impressive 41 megapixel shooter on the Nokia Belle handset, whilst both devices spot a VGA front facing camera.

The guys over at All About Symbian have come up with a rather interesting article that compares the iPhone 4S camera to the Nokia 808 PureView camera that goes into pixel size on the iPhone 4S and 808 PureView along with comparing with the Nokia N8 (image below). It all gets a bit technical, which I have to admit I’m not ll that au fait with when it comes to cameras, so I’ll just say if you wish to reader the article head on over to their website.

When it comes to capturing 1080p video on both devices, according to the guys over at The Handheld Blog, smartphone makers such as Apple and Samsung crop frames when shooting 1080p video in order for the processor to handle the load, whereas when it comes to the Nokia 808 PureView and 1080p video capture, the handset delivers the same wide view as 720p, and we have a video sample of both the iPhone 4S and 808 PureView video capture for your viewing consideration below.

Of course having a smartphone packing an impressive 41 megapixel camera it means that the Nokia 808 PureView isn’t the slimmest handset around as the devices measures 13.9mm thick with a weight of 169 grams, while the iPhone 4S measures 9.3mm thick and weighs 140 grams.

We also have a Nokia 808 PureView verses iPhone 4S camera video for your viewing pleasure below courtesy of the guys over at 5min, so don’t forget to check out the footage below.

Furthermore it appears that the release date and pricing of the Nokia 808 PureView for the UK has now been confirmed, as according to the guys over at Know Your Mobile, the Nokia 808 PureView will become available to purchase as of the 7th of next month and command a price tag of Â£539.95, although there is no word on which UK carriers will offer the device.

So with that all said and done, and hopefully you have all checked out the video footage, we’d like to know which device our readers would prefer when it comes to photography and video shooting, or do you perhaps think that the upcoming iPhone 5 would make a better comparison to the Nokia 808 PureView? 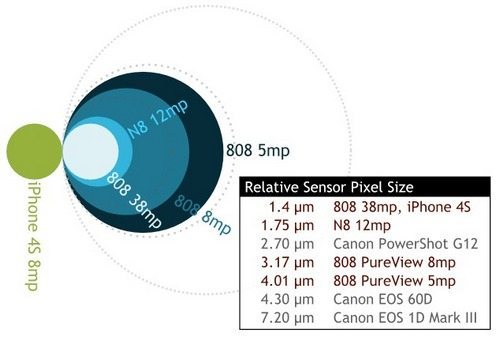