There is now an endless supply of new games coming out onto the Android and iOS platforms that provide users a huge choice to pick from. Some of the games may not feature the greatest graphics available on a mobile system, but can often be free or priced extremely cheaply. Today we have news of the Infinity Race app for iOS devices that features a revolutionary racing car.

The application was released a few days ago and is brought to you by Juan Felipe Angel Arboleda, and can be used on the iPhone, iPod Touch, and iPad. Thousands of drivers in the world are testing the technology for the future and save the planet, and the game promises to be a fun but addictive that will get users coming back for hours.

Users get the chance to race the most advanced and revolutionary racing car that is simply called Pro-Type, which has been developed with clean and safe energy that utilizes two different sources of natural energy. These are gravity and beans that when combined create gravity beans energy fusion.

The game screen on your mobile device is split into two and by pressing the right hand side you are given an extra gravitational impulse that allows you to take advantage of by gracefully sloping into the mountains. On the left hand side of the display players gain energy by collecting beans along the way, and as these beans are digested gravity beans are created that provide extra propulsion by tapping the button on that side of the screen

Player’s mission is to get the gravity powered vehicle as far as possible travelling through mountains and bridges in both sunny and rainy weather. Check the demo of the game below which can be found on the App Store for only Â£0.69/$0.99. 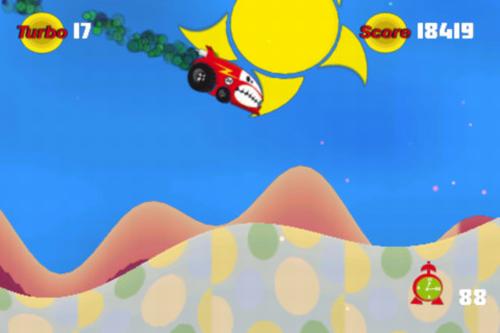