It appears as Google Drive has now been launched, Microsoft wants everyone to know about SkyDrive, as with SkyDrive the user can store just about anything, allowing the user to seamlessly access files when required whenever and wherever you wish and those that use the service get 7GB of free storage.

According to the guys over at Ubergizmo, Microsoft’s latest push for SkyDrive says that those that use SkyDrive will never be without the photos, videos, notes and documents that are important to them, and that they use can store anything to their SkyDrive, and its is auto-available to your device without requiring cables or syncing.

So with that in mind we thought we’d bring you the mobile apps for SkyDrive, and obviously the first one is for Windows Phone devices, which offers access to all your SkyDrive content along with any files that have been shared with the user.

Moving on we have the SkyDrive app for the iPhone and Apple iPad, which again does basically the same as the Windows version in as much as you can store all your documents, photos, videos and such, and upload them straight from your iOS device.

SkyDrive for iOS also lets the user open their SkyDrive files in other iOS apps, along with the ability to mange those files, rename, delete and create new folders. For those iOS faithful that would like to take advantage of SkyDrive for iOS you can downloaded the app from iTunes for free.

If you happen to have an Android smartphone or another handset, you can still make use of SkyDrive. You’ll just need to open your handset’s browser and go to Skydrive.com, although you’ll probably need to sign in using your Windows Live ID, and then you’ll be able to locate the file or photo you would like to view and then simply tap on it. 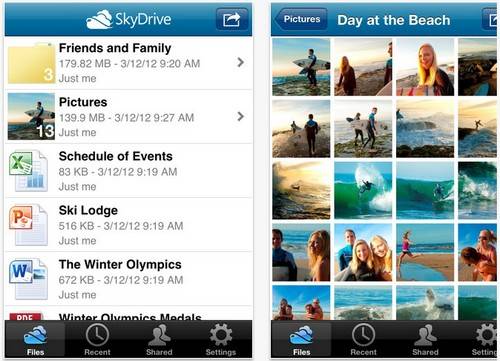 One thought on “Finding SkyDrive app for Windows, Android & iOS”