At the beginning of the month we told you about the upcoming title from Gameloft, N.O.V.A 3, which after first impressions left those that had seen it wondering if it was the best looking game of its type available on the iOS platform. Today we can tell you that N.O.V.A. 3 Near Orbit Vanguard Alliance is available via the App Store.

The game promises to be the most impressive and immersive sci-fi FPS franchise for smartphones as you fight for mankind’s survival in this great space shooter for mobile devices. The story begins four months after Kal scuppered the Volterites plans by sabotaging their war factories, which helped to stop the extraction of the Judger Artifacts.

Now though after the assassination of President Folsom, the government decided to surrender the colonies to the Volterite Protectorate, which was to prevent a damaging civil war between the increasingly pro-Volterite citizens. Hero Kal Wardin has been keeping a low profile since the Presidents death, but now he has received a plea of help from Yelena to come back to earth and once again come to the rescue of mankind.

The epic storyline sees you fighting through ten immersive levels across the galaxy, from war torn Earth to a frozen Volterite city. The game features a variety of different weapons and special powers, and players can run, drive vehicles, shoot, and even pilot a mech to defeat the hordes of foes. There is the option to join twelve player battles with six multiplayer modes spread over six different maps.

For the first time in the franchise multiple allies can get inside a single vehicle and cause destruction on the battlefield. This new game raises the benchmark for graphics and gameplay for a FPS game on the iOS platform. N.O.V.A. 3 Near Orbit Vanguard Alliance is available on the App Store priced at Â£4.99/$6.99, and is compatible for the iPhone, iPod Touch, and iPad running iOS 4.0 or later. 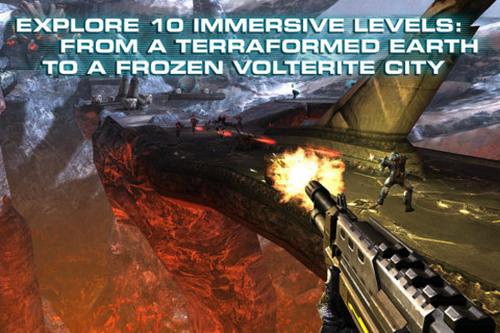