It is widely believed that Apple will give the world its first glimpse of the next version of its mobile operating system, iOS 6, at next month’s WWDC event, and it seems that iOS 6 is to possibly say goodbye to Google Maps.

There have been a number of rumours recently that Apple is working on its own in house maps solution after the purchase of a number of mapping companies, and now 9To5 Mac are reporting that sources are claiming that the company will unveil its own mapping solution as part of iOS 6 when it is finally announced.

This is set to change following Apple’s purchases of C3 Technologies, Ploy9, and Placebase that the company has used to build a complete mapping database. The application is now referred to as ‘Maps’ now that it is fully in-house, but Apple did extend their deal with Google ahead of the iOS 5 launch, but it now seems this deal is coming to an end.

There will be a new logo for iOS Maps, which is basically a redesigned version of the current iOS Maps icon with a view of Apple’s 1 Infinite Loop Campus, but with a new colour scheme. Apple’s version for Google Street View will also likely be an in-house solution.

Apple’s new Maps application will have a new powerful 3D mode that doesn’t come enabled by default, as users will need to click a 3D button that is visibly stored in the app. This feature pioneered by C3 will give users a new perspective on buildings and landmarks instead of a bird’s eye view, or relying on Street View that has a limited reach. The image below shows a rough mock-up of the idea.

Would you be disappointed if Google Maps was left out of iOS 6? 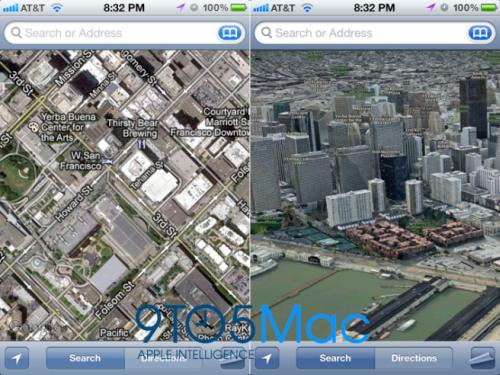