We always enjoy seeing the special Google Doodle’s that appear from time to time, usually in honor of a person or to mark an occasion and today it’s the turn of Edward Lear to receive this unique tribute. The English poet, author and illustrator is especially famed for nonsense poetry and we’ve found a couple of iOS apps to help you find out more about his work.

Edward Lear was born in 1812 and died in 1888 and the Google Doodle commemorates what would have been his 200th birthday. It depicts a scene from the ‘The Owl and the Pussycat’ as they dance in the moonlight and many of you will be familiar with this poem, undoubtedly the most famous of all his poems and limericks. We have a couple of iOS apps for you that will give you a real flavor of Edward Lear’s work.

The first is Selected Nonsense Rhymes by Edward Lear and this is a free app compatible with iPhone, iPod touch and iPads running iOS 4.2 or later. The app description tells of some of Lear’s different books such as his first, the “Book of Nonsense” followed by three more volumes including “Laughable Lyrics: A Fresh Book of Nonsense,” which was a compilation. The app itself includes some verses from the various ‘nonsense books’ and if you’ve never read Lear then this will give you a good idea of his poetic touch. The app also has illustrations, animations and games based on Lear’s rhymes. You can download this app from iTunes here.

Another available iOS app focuses on the first book and is simply called A Book of Nonsense, by Edward Lear. This app is priced at $0.99 and is compatible for iPhone, iPod touch and iPads running iOS 3.1.2 or later and shows some delightful illustrations. You can download this app here.

Hopefully one of these apps will be exactly what you need to enjoy Lear’s work all over again. You may be new to the poetry of Edward Lear in which case these would be a good introduction and would also be enjoyable to share with kids. What are your thoughts on Edward Lear and his work? Let us know with your comments. 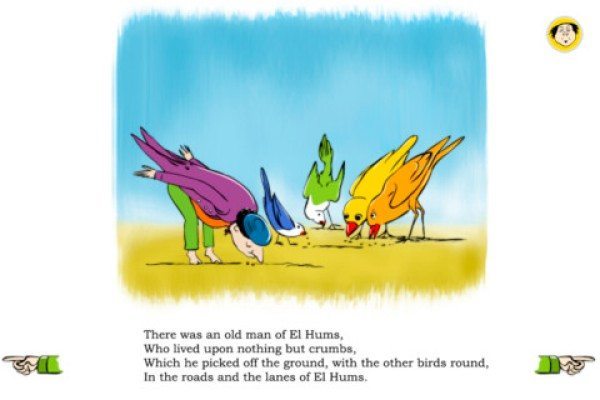