The need for BBM, do you use BlackBerry Messenger?

We do not normally ask questions, but we here at Phones Review have decided it is a must. There have been many reports covering the state of Blackberry and the need for BBM, teenagers are still very much into BlackBerry Messenger because it offers free text messaging, so what is the fate of this messaging service, please do read on.

The BlackBerry Messenger service is still very popular across the globe, but according to an article over on the Wall Street Journal, that popularity of BBM is threatening to weaken as sales of BlackBerry smartphones falter, and whilst Research In Motion softens their efforts to leverage BBM.

According to the WSJ article, RIM claims there are today in excess of some 55 million users of BlackBerry Messenger, which is up considerably from the 5.3 million that used BBM back in 2009. However in the same period, US BlackBerry smartphone market share has tumbled from over 50 percent all the way down to under 10 percent according to IDC.

Once Mike Lazaridis and Jim Balsillie stepped down and Thorsten Heins took control, apparently he decided that Research In Motion should no longer push BBM, and one person familiar with the matters says that ‘it was not up for discussion.’

Of course BlackBerry Messenger will be on RIM’s BlackBerry 10 devices; however RIM hasn’t thus far revealed any changes that might be coming to BBM. But other third-party messaging apps are becoming popular such as the WhatsApp application, which is the most popular at the moment according to app downloading tracker AppAnnie.

However, according to Michael Gartenberg of Gartner, he reckons BBM is still number one right now due to being the around the longest, but the question is can RIM maintain this as a ‘defensible position’ especially when others are catching on.

So basically it appears BBM users are leaving the messaging service for other messaging apps, and other devices other than BlackBerry, so with this in mind we’d like to ask out readers if they still use BBM for messaging their friends? 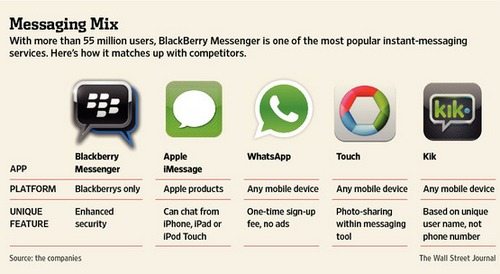 2 thoughts on “The need for BBM, do you use BlackBerry Messenger?”