Well now, what do we have here? Is Apple looking to enter the stylus game and follow rivals such as Samsung by delivering a stylus that will work with future Apple iOS gear? Well it could be, if the latest patent filed by Apple is anything to go by, as word is Apple has filed a patent for a device called the iPen.

According to the guys over at Slash Gear by way of Patently Apple, yesterday the USPTO published a patent from Apple concerning Apple’s future iPen and related graphics program, which was filed for Apple in the fourth quarter of 2010 by inventor Omar Leung and Aleksandar Pance.

Apparently the iPen is meant to work with a tablet, and work with an active app and OS between drivers on both the tablet and the iPen, which the Slash Gear guys suggest there is quite a bit more going on here than in the majority of today’s styluses, other than perhaps the S Pen used on the Samsung Galaxy Note.

According to Patently Apple, the Apple iPen is “an input device capable of generating haptic feedback may help a user navigate content displayed on the display screen, and may further serve to enhance the content of various applications by creating a more appealing and realistic user interface.”

Apparently the Apple iPen has a transmitter and sensor near its head, a haptic actuator in the middle, and at the tip sits a receiver, whilst between the controller and receivers there is a decoder/demodulator, and right at the end sits a battery power source.

Of course if Apple were to deliver the iPen then Apple would probably need to redesign the Apple iPad so it can house the stylus. Whether the iPen becomes a reality on a future iPad remains to be seen, but the chances are we are not going to see the iPen in the Apple space any time soon. However, perhaps Apple is just putting a stylus patent out there ready as future patent fight ammunition. 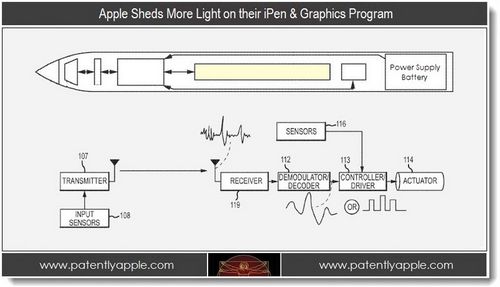