Obviously here at Phones Review we bring readers news on all the latest and forthcoming phones but every now and then something a little unusual comes along. Meet the Kyocera Urbano Progresso, the world’s first speaker-less smartphone.

The Urbano Progresso from Kyocera will launch in Japan on May 30 but the idea of a speaker-less phone is bewildering for most of us who can’t fathom how it works. Apparently though, the Urbano Progresso has a vibrating display, which manages to conduct sound through the ear canal instead of the customary speaker. This makes it easier to hear phone conversation in busy and noisy places and also benefits those who are hearing impaired.

It sounds like a mightily clever device and other specs and features include a 1.4GHz Snapdragon S2 dual-core processor, a 4-icnh display, 8.1-megapixel rear camera, 1GB of RAM and 4GB of internal storage and it all runs on Android 4.0 Ice Cream Sandwich. According to Droid Matters, sourced from AU(JP), the Urbano Progresso also has plenty of features specific for Japan such as infrared and the FeliCa mobile payment system. Another plus is that this phone is compatible to be used across the world as it features antennas for CDMA, GSM, GPRS and UMTS.

Japanese carrier AU will release the phone on May 30 and if you want a closer look at the device then you can see hands-on video of it below this story. Could you be tempted to try out this smartphone with a twist, the world’s first speaker-less smartphone? What do you think of the new technology that has made this possible? Let us know by sending us your comments. 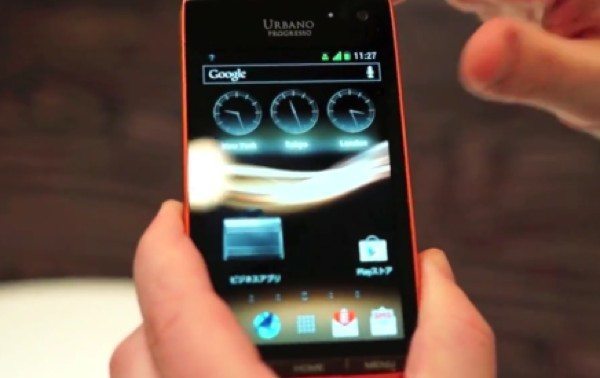