The other day we mentioned that there would be a Batman edition of the Nokia Lumia 900 windows Phone coming out to play, although at that time it wasn’t clear as to whether the device would be known as the Batman Edition or the Dark Knight, or how much the handset would cost, but now we have more info on the matter.

According to Phones4u, the Batman edition of the Windows Phone will be known as the Nokia Lumia 900 The Dark Knight Rises Edition, which will be available exclusively from Phone4u.

The Dark Knight Rises Edition offers such content as wallpapers, ringtone, trailers, and play the location based challenge “Claim Gotham City,” where you choose a side, either Batman or Bane, and check in with Foursquare at nearby locations to gain points and rewards.

Will any of our readers out there be pre-ordering the Nokia Lumia 900 The Dark Knight Rises Edition? 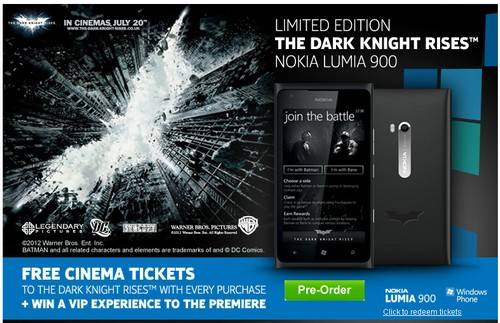