If you own an iPhone then you will probably know that the iPhone cable is somewhat long and can sometimes be a bit of an annoyance especially if you are carrying it in a handbag and it gets entangled with other cables and stuff, so would a much shorter iPhone cable be of use to you?

If your answer is yes, then you might be interested in a Kickstarter project called Twig, which is an ultra portable cable for the iPhone at just 4-inches long, and thus perfect for the iPhone user on the go.

Twig for the iPhone isn’t just a short cable though, as the device has been designed with a bendable wire skeleton and three legs, so the device can stand up as a tripod, and when you bend the legs they stay bent, you can also bend the Twig so you can plug it into an AC adapter so it can be an instant wall charger dock.

With the Twig for iPhone you can charge and sync on the go, charge your iOS smartphone right on the outlet, use it as a tripod for snapping photos, using FaceTime, and so on.

Currently the Twig for iPhone Kickstarter project has a funding goal of $50,000, and has received pledges to the tune of $23,027 with 58 days remaining, so if you would like to see Twig become a reality you can make a pledge by hitting up Kickstarter, and just so you can see what Twig is all about we have a quick demo video for your viewing pleasure below…enjoy. 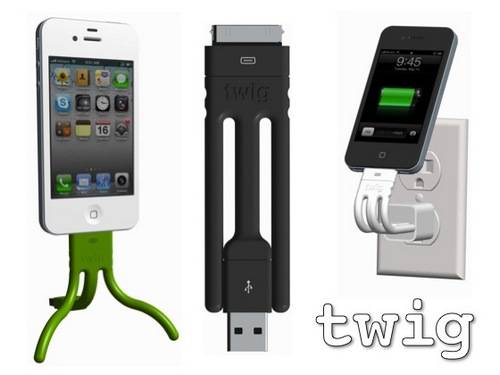