If you have an Android Ice Cream Sandwich smartphone, and would like to help out Vlingo by becoming a Bata tester, there is now an Android app available that will allow you to become a Vlingo Beta tester, and that app is called the Vlingo Labs (Beta) app.

Vlingo Labs is what they call a ‘test kitchen’ for trying out new ideas before they put them on the menu so everyone can try them out, however the Vlingo Labs (Beta) app is for those that have an Android Ice Cream Sandwich handsets only.

The Vlingo Labs (Beta) app enables the user to send feedback on new design and functionality, and this version supports web search, voice dialling, text messaging, meeting creation and calendar management, Wake Up Word, so you say ‘Hi Vlingo’ to activate, is English language only, and for now only US and Canadian.

Apparently changes for Android 4.1 also includes performance improvements and various bug fixes, however one should be aware that the Vlingo Labs (Beta) app is somewhat rougher round the edges, and has a more limited feature set than the full Vlingo virtual assistant, which apparently is intentional as they wish to receive initial impressions for their early adopters.

Thus if you wish to become a Beta tester for Vlingo, and have a smartphone running Android 4.0, you can download the Vlingo Labs (Beta) app to your device for free by hitting up Google Play. 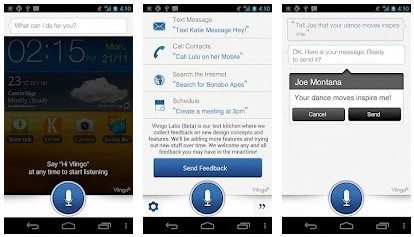