If you are over in the good old US of A and support the Republican presidential candidate, Mitt Romney, and own an iPhone, you can now show your support for Mitt Romney to your social networks by way of the With Mitt iOS app, an application that allows you to share Mitt inspired photos.

The With Mitt app for the iPhone enables the user to customise their photographs with ‘I’m With Mitt’ frames, along with adding a personal message, and then sharing those images with social networks such as Twitter or Facebook or via email.

According to the guys over at Mashable, Mitt Romney’s digital director, Zac Moffatt told them that the With Mitt app is a light-hearted way to celebrate the candidate, and they thought it would be a fun way and easy way to show case support, something the guys say hints at the With Mitt iOS app would be the first of many mobile apps for the Romney campaign in the future.

Apparently after you have shot off your “I’m With Mitt’ photograph, the application then prompts the user to either use another image, or make a donation to the Mitt Romney campaign.

For those Mitt Romney supporters that would like to show their support via their iPhone, you can download the With Mitt iOS app to your smartphone as a free download by hitting up iTunes. Are any of our American readers with an iPhone already using the With Mitt app? 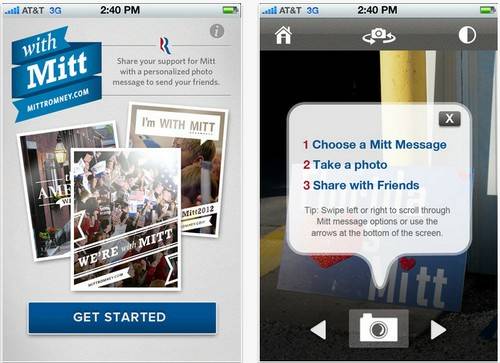 One thought on “With Mitt Romney 2012 photo app”