No doubt most know that Microsoft entered the tablet space and unveiled the Microsoft Surface tablet, which apparently comes in Windows RT and Windows 8 Pro versions, and just so our readers can see what the Microsoct Surface tablet looks like in action we have a hands on video of the Surface tablet for your viewing consideration below.

The Microsoft Surface tablet demo footage comes our way courtesy of the guys over at Slash Gear who were on hard at the event to get some playtime with the new Microsoft slate, of which they say the lightweight magnesium frame feels nice in the hand, with a smooth PVD finish and weighing in at just 1.5 pounds.

The Microsoft Surface tablet is a 10.6-inch tablet with a clear and crisp display that offers great viewing angles and the slate is thin at only 9.3mm. Apparently the Windows RT model runs on an ARM chip whilst the Windows 8 Pro model is powered by an Intel Ivy Bridge 22nm processor.

Unfortunately the Windows 8 version is slightly thicker at 13.55mm but wasn’t available, but the guys did get some time with the Windows RT Surface tablet, and they say the slate is incredibly well designed, but they do feel that the edges are somewhat sharper than they would like.

Anyway, I’ll leave it right there so you can head on down and mash that play button to check out the Windows RT Surface tablet in action, and feel free to let us know your opinions on Microsoft’s new tablet, do you think the Surface can be an Apple iPad challenger? 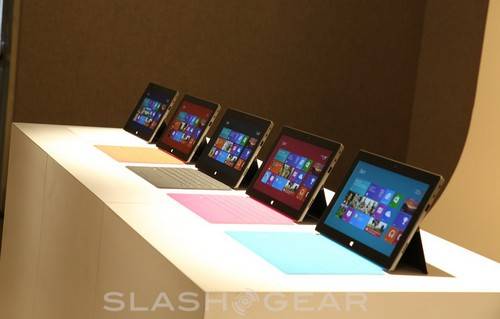 One thought on “Windows RT Surface tablet handled on video”