As one of the Android faithful, like all Android users out there I have been able to play every version of the popular multi-platform game from Rovio, Angry Birds for free, whilst the iOS faithful have had to pay for their green pig bashing fun. However that has now changed with Angry Birds Space as Rovio has released free versions of the app for both the iPhone and iPad.

However before all the iOS faithful Angry Birds fans get too excited at a free version of Angry Birds Space for the iPhone and Apple iPad, unfortunately there are limits with the free apps in as much as you’ll only get access to ten levels of pig bashing in zero gravity.

Furthermore the free version also have in-game advertisements that might or might not get on your nerves, but the game does feature free updates, new Angry Birds, new super powers, detailed backgrounds, and trick shots in zero gravity.

Of course you can always opt for the paid version if you really don;t like in-game adverts, but as Rovio have for some time offers both free and paid apps on the Android platform, perhaps they thought it was about time they did the same with the iOS platform.

Anyway for those iOS faithful that would like the Angry Birds Space free app for the iPhone you can grab it by hitting up here, or if you prefer the free HD version for your Apple iPad you can download the app from iTunes. 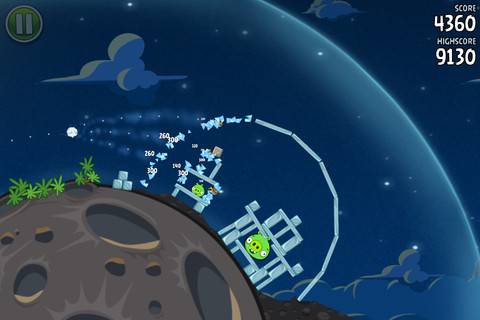