Quite often upcoming handsets are leaked long before they become official that will get consumers looking forward to get hold of the device when it is eventually released, and today we have some possible tasty news for you in the form of the specs for the HTC One XXL.

At the beginning of the month we had a concept handset for you that was called the HTC One XXL, and was suggested what the companies answer to the hugely successful Samsung Galaxy Note could be like, and as Phandroid are reporting there has been talk that the company were thinking of working on a handset to challenge the Galaxy Note.

While the concept HTC One XXL is not about to be released a new leak is suggesting there is a device called the HTC One XXL in the works, but it is not thought to be a handset the size of 5.3-inches though. Instead it is believed to be a super charged version of the already available HTC One XL, which is the US version of the international HTC One X with its Nvidia Tegra 3 processor. A screenshot that can be seen below shows some impressive specifications that include a 4.7-inch display.

There is also a Qualcomm S4 quad core processor with 2GB of RAM along with an eight megapixel camera on the back, and a 1.8 megapixel shooter around the front for video calls. It is also claimed to feature the new 802.11ac Wi-Fi technology.

Obviously this screenshot could easily be a fake and created by someone with too much time on their hands, but if it is accurate we could see the device becoming available on Sprint, T-Mobile, and Verizon later this year, which would make up for missing out on the regular HTC One X.

Do you hope this information is true? 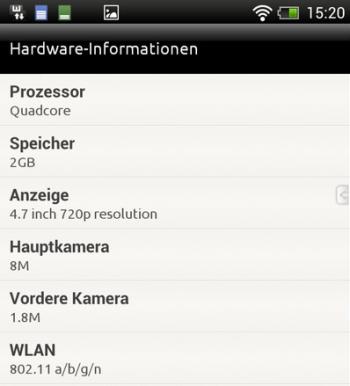 One thought on “HTC One XXL specs possibly leaked”