Obviously just like most smartphone users, when you are out and about there could well be a time you need to charge your iPhone, and although there are numerous portable battery packs available to charge the iPhone there is a new iPhone charger coming to market that lays claim to being the world’s smallest and most portable iPhone charger, and is called JuiceBuddy.

According to the guys over at Ubergizmo, by way of Gizmag, the JuiceBuddy charger for the iPhone and iPod Touch is small enough to be fitted to a keychain, and the JuiceBuddy even comes with a clip included so you can clip it to your keychain or backpack.

The iOS smartphone user doesn’t even need to carry their charger cable with them, as all you require is an outlet for the JuiceBuddy to plug into, flip open the cap and slide on your iPhone. Also you can remove the keychain portion to reveal a USB port in the accessory so they can charge other devices as well.

We have a quick promo video of the JuiceBuddy for iPhone in action for your viewing consideration below, so don’t forget to mash that play button and check it out.

Price wise the JuiceBuddy is limited to the USA at the moment costing $25 from Pacific Productions, although apparently a UK and EU version of the JuiceBuddy expected to become available as of the 15th of September.

So there you have it, will any of our iPhone toting readers be picking up the JuiceBuddy in the near future so they don’t have to carry around a cable or battery pack? 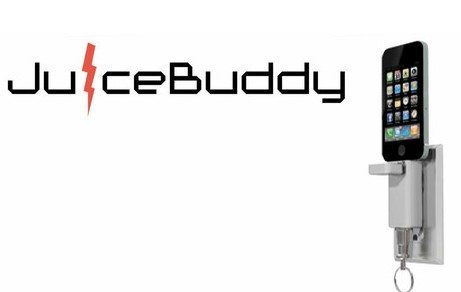